Walking in downtown Americus, Georgia, one has to be impressed by this proud Victorian town that pops up in the middle of the cotton and peanut fields of south Georgia. Once among the largest cities in the state, the grandeur of Americus was frozen in time when the railroad suddenly no longer mattered, leaving the urban industrial sprawl to nearby cities like Albany and Macon while this gem of a small town quietly basked in the gentile spirit of days gone by.

Through the vision of former mayors Russell Thomas and Tom Gailey, Americus has become a model for historic preservation. The Windsor Hotel is the centerpiece of the community’s concern for its past, rising up like a castle on the highest point of the seven hills that comprise Americus. Just down the road, the Rylander Theater’s more recent restoration speaks to a place in time when people from miles away hopped the train to see the Webster, the Mental Giant read the minds of the audience, or thrilled to the suspense of Reno, the mysterious magician.

In its later transition to a movie house, the Rylander Theater was the place where President Jimmy Carter first dated his sweetheart Rosalynn Smith. Just after the theater opened, President Carter celebrated his 75th birthday in this spectacularly refurbished 600-plus-seat theater which, only three years earlier, saw as its only patrons the pigeons who flew through the holes in the roof.

The goal of the play developed for the community was to do onstage what the architect had done to the theater: recreate a time gone. In the 1920’s and 30’s when the theater first opened, this would mean recreating the raucous, spirited performance that was the very essence of Vaudeville Theater.

The first stage of this process took place when student Robin Bates began researching the local paper’s archive for articles and ads about the acts that performed at the theater. The opening show was the play, “Lightnin” about a man named Bill Jones, who is, “The champion liar of the county. A shiftless ne’er-do-well; a tippler, philosopher and friend.” Ads for this play appeared alongside ads about the amazing healing powers of “Cardui”; along with Dr. King’s new discovery cough syrup (Never let a cold get a hold) and an announcement from Walter Rylander himself to “the colored people of Americus and vicinity”:

“In the new $150,000 Rylander Theater, we have built and equipped an EXCLUSIVE COLORED BALCONY with all the comforts that are incorporated in the other parts of the house…A private entrance has been provided; from the time that you leave the Lamar Street sidewalk until you have returned thereto, you will come in contact with none except your own people. This was done to spare you inconvenience or embarrassment.” 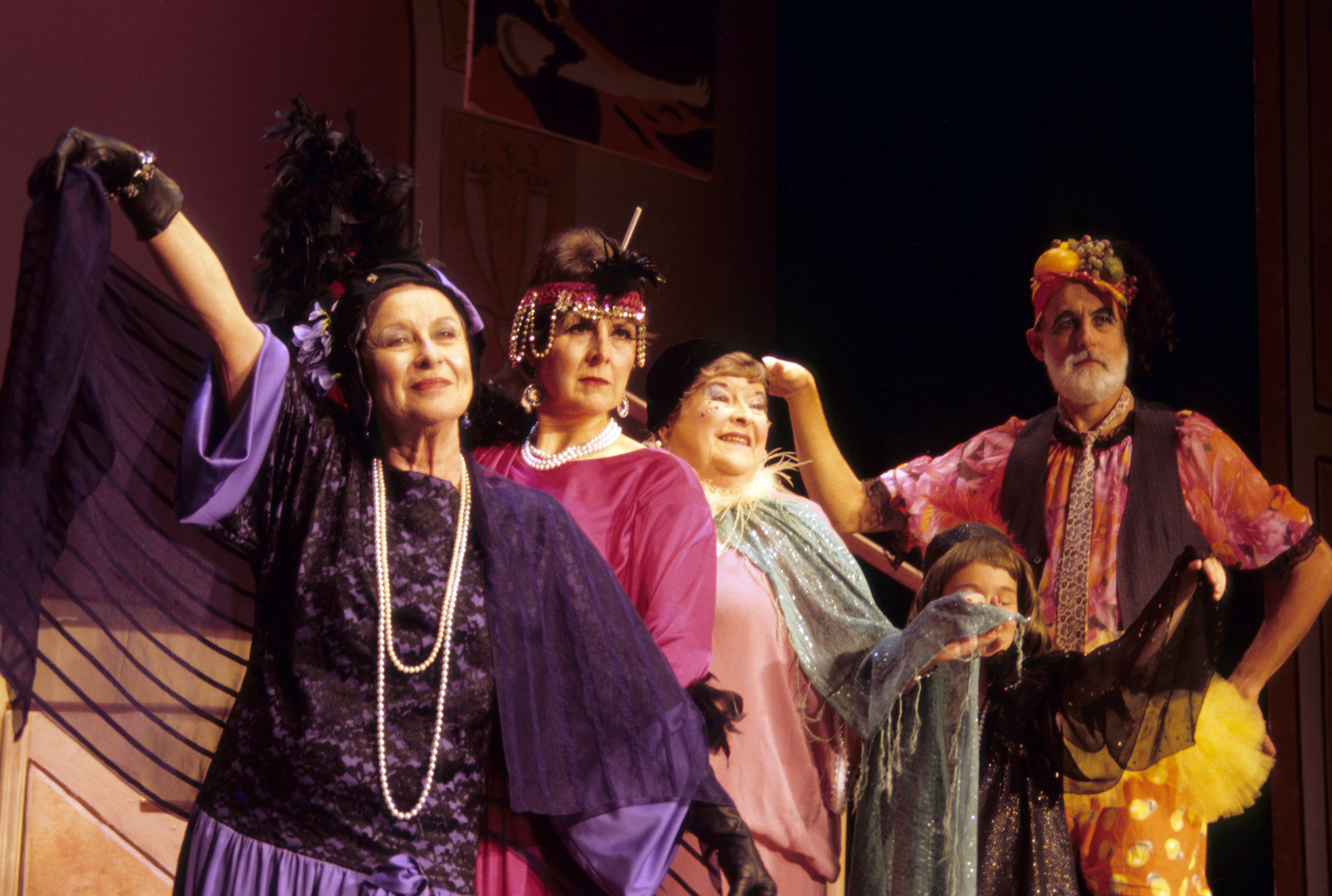 President Carter often wrote about visiting the Rylander as a boy along with his African American playmate and each of them having to use separate entrances to separate seating sections.

The articles Robin collected included plays, movies, vaudeville acts, and period notes. The book became a fundamental research tool for the writing of the play and for its execution. It was used by the entire artistic staff throughout the development and production of the play.

The challenge for the writing of the play was to somehow embrace the spirit of performance that was the early days of Vaudeville Theater. In just one production we would have to somehow get a sense of the diversity of performance that was vaudeville. This includes “Alexander: The Man Who Knows All”; Shamrock Levy and his “tornado of music,” The dazzling beauties of the Broadway hit “Take it From Me” (Best looking chorus on tour. Complete with artistic dance numbers); and “Carlos, the Man in the Box” who:

“Positively is the only act of its kind and without exception the best vaudeville act to be anywhere and is highly recommended by the press and public…Think of a man 7 feet in full drum major’s costume, 6 feet 2 inches in street costume, going into a box 27x21x21 inches and coming out a number of times in a complete change of costume. NOTE: This is not an illusion: no trap doors used.

My big break in the writing of this play walked through the door during an audition I was holding in New York for the American POW Drama. I had almost forgotten that I had also listed a separate notice for vaudeville-era performers. As the auditionees before and after them tried to show the depth of human desperation, Mike and Roberta Straka performed magic in costumes that likely stirred attention in the hotel lobby.

It was awhile before we could actually meet face to face and discuss the Rylander project. What I found in this wonderful New York based entertainment duo was worlds of knowledge pertaining to performances of every sort and a historic perspective that allowed me to bring the past into the present.

First, Mike explained to me that vaudeville never really died, it just moved to the circus and to Las Vegas. Acts like Siegfried and Roy or the contortion or high wire acts of the circus were a continuation of that same vaudevillian tradition which had as its central tenant “entertains in any way possible.”

Mike also helped me to understand the wide range of activities which constituted vaudeville performance. On the one hand, there were acts of skill that performers took a lifetime to perfect. Mike and Roberta’s own magic show was one such example, as were the illusionists, contortionists, rope handlers, and jugglers. These were learned acts that took years to perfect and that were repeated from town to town in a dizzying array of performances at non-traditional venues throughout the country.

But on the other hand, there were other acts that could easily be learned and mastered by most anyone. Some were more or less ‘concept tricks’ which required an insider’s knowledge to perform. Others were simply unabashed attempts to do something unusual or outrageous on stage and call it entertainment.

An example of the former was the quick change act. Here, a man or a woman walks in a continuous circular pattern onstage, then walks briefly behind a partition only to reappear a second later in a completely new outfit. This new change of clothes is again paraded around the stage and the quick change is repeated a number of times.

The trick of the trick is that the act is done with identical twins: While one is parading around the stage, the other is changing behind the partition so that when the one onstage steps away from the audience, the other emerges in a completely new outfit giving the illusion of a quick change.

As for the other forms of entertainment, PBS did an excellent documentary on vaudeville theater showing the wide range of more or less unskilled activities that appeared onstage One that comes to mind was the act consisting of three women who simply tossed a handkerchief among themselves and froze in whatever position they were in the moment the handkerchief was caught. This was repeated ad-infinitum. In a certain sense, vaudeville included whatever anyone did onstage and had the nerve to call entertainment.

The challenge for my writing this play was to somehow recreate this time and spirit that was and is vaudeville. The vehicle I ultimately developed was a melodramatic play which parodied the melodramatic performances of the period in which a heroine –Fannie Fakename –becomes enchanted with the performance she sees on the stage of the Rylander Theater, and wants to embrace the magic onstage as a way of escaping the difficulties of life in the 1920’s. She is particular concerned about the havoc wrecked by the Boll Weevil. The magician performing is happy to oblige, and Fannie disappears into the world of illusion. Searching for the happy ending in life, Fannie appears on the set of a melodrama entitled “The Happy Ending,” and from there, things get increasingly confusing in a metaphysical sort of way.

Throughout the play, Fannie recalls the performances seen on her home stage of the Rylander Theater, which then becomes the vehicle to usher on any sort of act we could develop in the vaudevillian tradition. As the main characters name was Fannie and we were following her various exploits through a number of circumstances, the play became “Following our Fannie.”

In regard to the acts incorporated into the play, we followed the three-point rule developed in my conversations with Mike. On the one hand, we hired Mike and Roberta along with other professional performers to do that which nobody else could do. We featured remarkable acts including juggling, rope tricks, magic, and illusions. Then, we asked our resident performers to work with the community to teach them some of the tricks of the trade. Within a few weeks, we had people who could eat fire, do novelty acts, and do daring escapes from straight jackets and other means of confinement.

Finally, we developed that which was simply absurd: ‘dazzling beauties’ who would sporadically wander across the stage and stop everything that was going on; a pantomime horse who would show his ability to count by stomping his feet on command –etc. etc. ad-infinitum.

In the end we had a show that engaged the community on many levels and assaulted the audience with an ongoing array of everything including the kitchen sink –which actually made an appearance onstage as well. Fundamentally, the play was a recreation of the unpredictable and outrageous spirit at the heart of Vaudeville Theater.