You have to travel a lot of back roads to get to Plains, Georgia. Highway numbers like 26, 49, And 228, suggest some sort of individual identity for each stretch of pavement, while actually driving these roads suggests otherwise. No matter what the number, on either side, forever and in every direction, cotton or peanut fields extend towards infinite horizons; and where these crops have not been planted, Georgia pine trees rise straight up in clearly defined rows, waiting to be harvested. 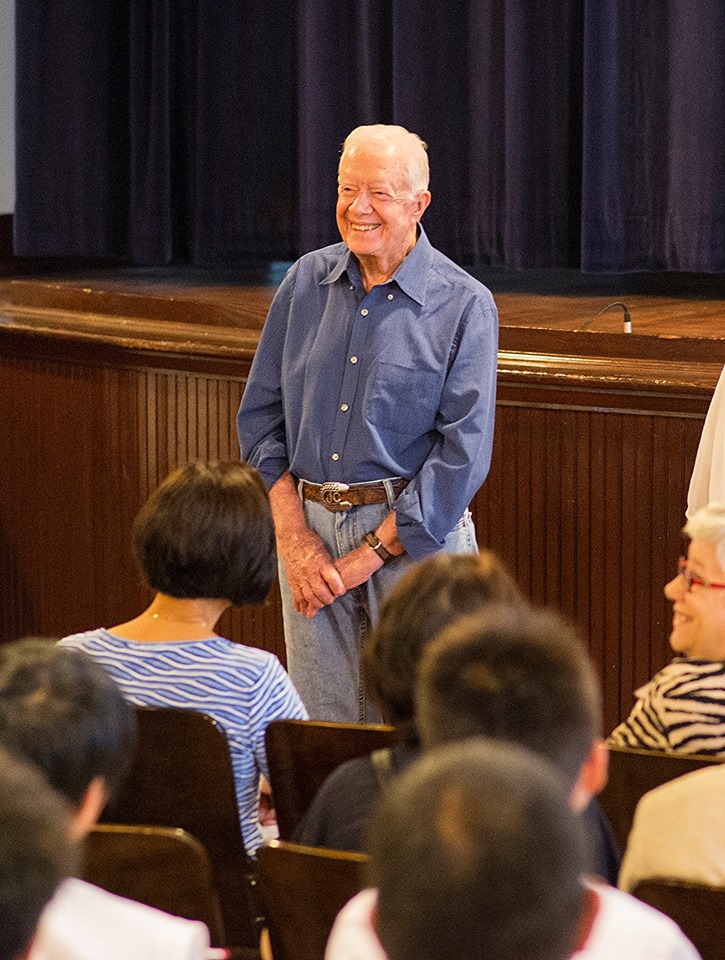 Except for the security fences, which seem like a sort of ‘Area 51′ transposed to South Georgia, the Carter homestead is a plain looking 70’s style house that happens to have an unimpressive-looking pond in the front yard. Here, and throughout the small town of Plains, the juxtaposition of place and Presidency is compelling. Whenever he is in town, President Carter provides the Sunday school lesson at Maranatha Baptist Church, which also is a very ordinary looking place with out-of-date carpeting and not so much as a stained glass window to liven up an otherwise dull interior.

Yet beneath and between the pecan groves and magnolia blooms, some very remarkable things have taken root in the sandy soil of Sumter County. Home to two National Historic Sites –Jimmy Carter and Andersonville – and home as well to the internationally renown not-for-profit organization, Habitat for Humanity, the story that shaped the careers of the men who emerged from here was one of conflict and internal strife giving rise to vision and perseverance. It is also interesting to note that at one time this same small county could claim two National Football League Coaches, Dan Reeves and Chan Gailey.

In the 1950’s and 60’s, like so much of the country, this area was wracked by the social changes brought on in the wake of the Second World War. The clearly defined social interactions between blacks and whites were being turned on their heads as the reinterpretation of the law declared first separate but equal, only to decide that even that was not good enough. In Sumter County, battle lines were drawn in churches, schools, and along the streets of the county seat, Americus. Concurrently, the Supreme Court struck down the county-unit system of voting which gave undo political influence to these rural counties, declaring instead one-man one vote to be the law of the land.
Somehow, the very small minority who found themselves on the “wrong” side of the race issue –supporting the changes instead of fighting against them –would generally go on to do remarkable things. Jimmy Carter and his family were among the very small group who were so ostracized during this time. His peanut business was boycotted, signs were painted across his home, “Coons and Carters go home”, and the stature in the community that his family had claimed for generations became marginalized.

Across town at Koinonia farms, a man called Clarence Jordan was putting forth the very revolutionary idea that black and whites should be able to live together in peace. For this, his community was bombed and its people threatened. It was during this turbulent time that Clarence wrote the Cotton Patch Gospels, which became the inspiration for the Broadway play of the same name by Tom Key and Harry Chapin.

At some point, a couple named Millard and Linda Fuller were going through their own form of spiritual crisis and wound up at Koinonia, bringing with them vision and an entrepreneurial spirit. From the idea created at Koinonia called ‘partnership housing,’ would emerge Habitat for Humanity International, which has now built more than 200,000 homes in eighty-six countries.

Yet, when Clarence died, Millard had to drive his body into town because no funeral home would come to take it. When Jimmy Carter ran for governor in 1972, his campaign was so concerned that he would lose his own county that they developed a strategy of working from the outside-in, creating a momentum in all the other counties in Georgia that they hoped would so overwhelm his native county, they would have no choice but to vote for their controversial native son. 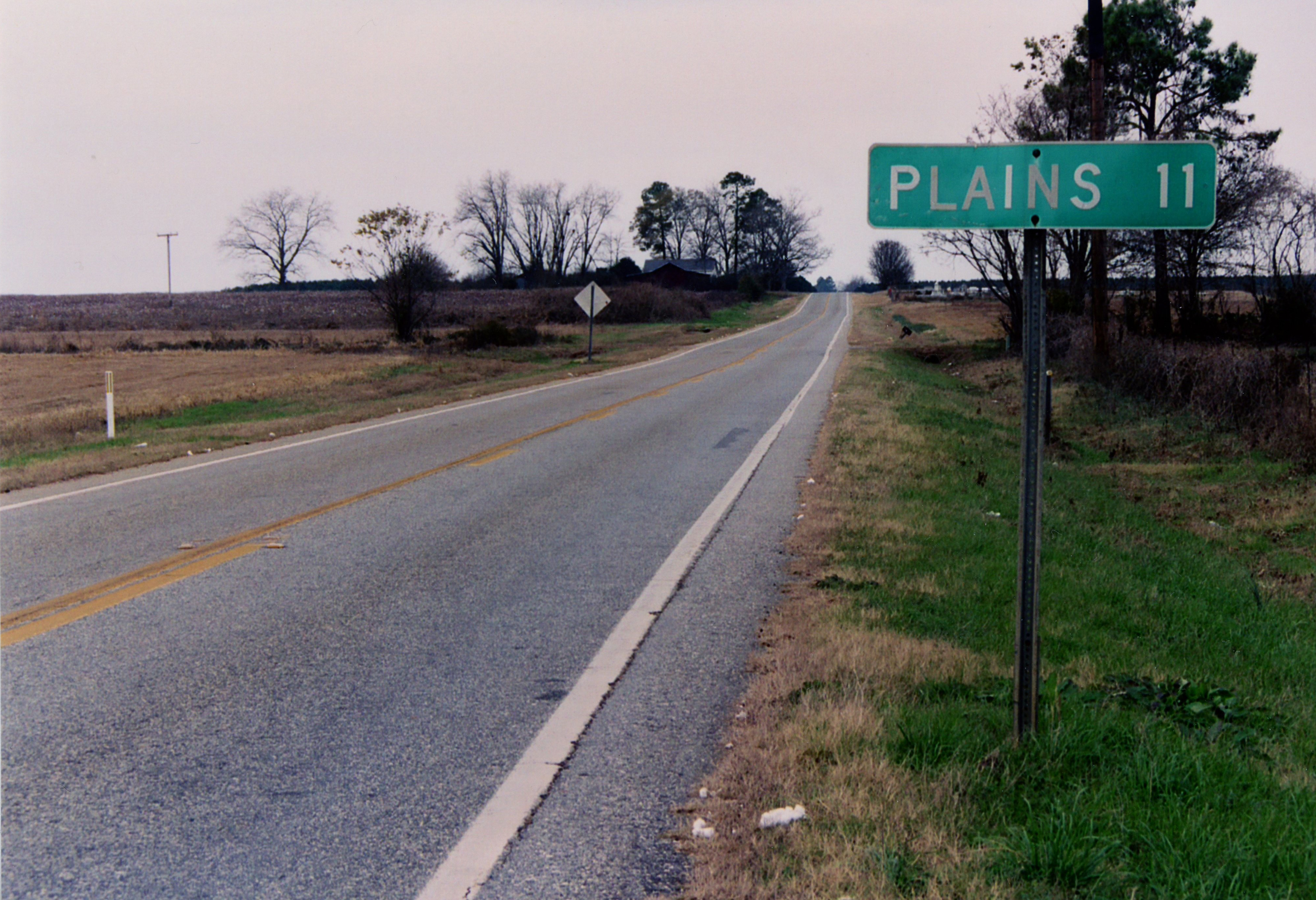 How formative was the social turmoil of his life in Plains in defining the world view of a President and thus shaping events of the world between 1976 and 1980? As Director of World Communities at Georgia Southwestern State University in nearby Americus –the county seat for Sumter County that includes Plains – I had spent seven years living among the people who could provide the answer to that question. .

A large part of my research involved talking to the people from the Carter presidency. Among the people I interviewed and corresponded with -including Jimmy and Rosalynn – were Former Press Secretary, Jody Powell; Congressional Liason, Frank Moore; Jerry Rafshoon, the man who helped mastermind Carter’s campaign, and many others. I even traveled as far as Panama to interview the people most affected by one of President Carter’s greatest achievements in office.

But it was my living in Americus that provided the greatest insight into the areas most famous native son. The nuggets of truth that would help me to make sense of this story would fall into my lap when I least expected: perhaps at a party or in a casual conversation on the streets of the town; at a funeral, or even in the backroom of the local liquor store. It was in this, the least likely of all research facilities, that I would often meet with Arthur Cheokas, the local liquor retailer who was one of the group of men along with President Carter who found themselves on the wrong side of the race issues and ostracized by the community. Born in Greece, Arthur believed deeply in the dream of America and could not stand to see the sort of racial prejudice that characterized this period.

Arthur became a strong supporter of President Carter in his race for State Senate and for Governor, and continued his close association with the President and Mrs. Carter during and after their trip to Pennsylvania Avenue. One of the most astute observers of human nature, his insight into President Carter was direct and right on target: “He likes to solve problems,” Arthur said. “If you want to engage Jimmy Carter, give him a problem to solve.”

In fact, Arthur had done just that when he asked President Carter to intervene in a struggle between the Greek Orthodox Church in Istanbul and the Turkish Government. A fire in the library of the Patriarchate had closed it long enough for the Turkish government to close it, according to a law stating that if mass is not said in any Greek Orthodox Church for more than one week, the church is closed permanently. In presenting the situation to President Carter, Arthur offered to the president a dire scenario that suggested resolution was impossible. This caught President Carter’s attention, and he then contacted the president of Turkey and resolved the situation entirely.

Testing this hypothesis, I asked the President and Mrs. Carter to attend the first technical rehearsal of my production “Grace Will Lead Me Home: The American POW Drama.” The first technical rehearsal is when the technical elements such as lighting, set, props, and costumes, are first introduced to the actors, who have been rehearsing independent of these elements. Anyone who has any experience in theater knows that the first technical rehearsal is an absolute disaster. It is the time when everyone becomes convinced that the show can’t possibly come together, as lights come on at the wrong time, sound cues occur seemingly out of nowhere, actors trip on pants that are five-inches too long, and set pieces become dangerous weapons in search of their next unsuspecting victim.

President Carter is as strict and disciplined with his time as any man on earth. It is said that while most people talk about getting something done and look at their calendar, Jimmy Carter looks at his watch. He had scheduled exactly twenty minutes to attend our rehearsal that night, and we would expect him for no more than that.

As anticipated, the rehearsal was a disaster. In addition to the usual problems, this particular play had three huge set pieces that were moved by the actors into different positions on stage. Thus, for a large part of the rehearsal, we were treated to a theatrical form of bumper-cars, which almost destroyed the set, the stage, and even an actor or two.

The President and Mrs. Carter stayed for nearly and hour an a half. As we watched the rehearsal, I received many suggestions from the President on how to improve what we were witnessing (“The microphone should be on when that person is talking…”), and what should have been a disaster turned out to be a most enjoyable experience for all concerned.

This is just one of many examples of how I came to know Jimmy Carter through living in his home county. The more time spent understanding Sumter County and especially the racial conflict of the 50’s and 60’s, the more I too, began to understand the Carter presidency.

The result of his experience on the race issue was that Jimmy Carter and those few who were on the same side of the race issue as Jimmy Carter, were ultimately shown to be correct even though the vast majority of people around them were violently attempting to show that they were wrong. It was easy to understand, then, how during his presidency, he often took on issues that had little public support in his attempt to assert a greater good. The Panama Canal Treaty, for example, had about a five-percent public approval rating when the president undertook this because he believed it was the right thing to do. Similarly, his stance on energy conservation, health care reform, human rights and other matters of foreign policy all had low public approval ratings and were considered politically suicidal. 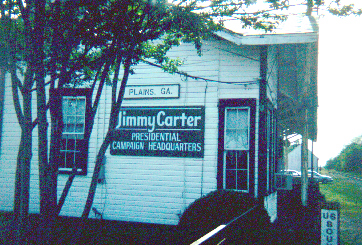 “Transcendence” is the Christian articulation of this reach. It is, as Carter writes in his book, Living Faith: “… about striving, stretching and searching; wanting to know, understand, and experience God: transcendence. We find all of this in Jesus, who showed us what it means to live the transcendent life: a life of higher expectations, searching, stretching the boundaries of who we are, doing not only what we have to do, but what we set as a goal for what we should do. The most beautiful acts of Jesus as recounted in the Bible do not relate to compliance with existing laws, but they were the extraordinary acts where he reached beyond what was required or expected- Transcendence.”

I believe this was an ideal that remained fundamental to his political activities and was given form through his experience in South Georgia. On some level, a perspective was created which came to believe that if everyone is against me, therefore I must be right. From this unique set of circumstances in this somewhat remote and certainly removed place, the stuff of a presidency was made.