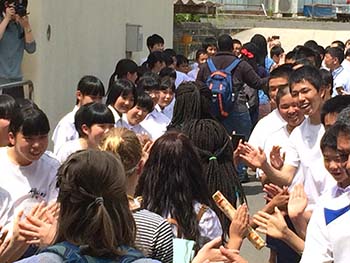 The play took place in the context of a cultural exchange which has gone on for more than twenty-five years between the towns of Konu and Americus, in Sumter County, Georgia, Carter’s home county. The play was a first ever event in history of the exchange, causing what the Japanese hosts heralded as, “the best exchange ever.”

Rehearsing and making familiar an original drama that showcased their talents gave students a once-in-a-lifetime opportunity to perform in a foreign land. But perhaps even more compelling, the discipline of the rehearsal process combined with the mastery over the script provided the wings upon which students who had never been on an airplane traveled around the world. The play was the familiar thing, the security blanket they brought that allowed them to conquer a new land. Through it, we were able to provide life-changing experiences for students much younger than those who had traditionally gone on the program, reaching down into the sixth, seventh and eighth grade for the majority of students. 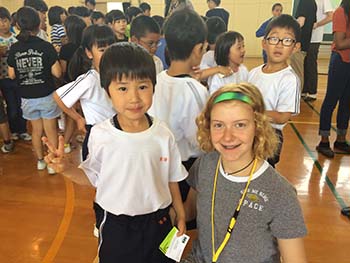 Prior to leaving, students were given extensive training in Japanese culture. The exchange program gave them privileged insight into that culture by having them stay in the homes of host families. The students were then able to return the favor when the Japanese delegation returned to the United States. Providing a tour of Carter’s home county also allowed the students to learn about the Civil Rights history of their home through the process of showing it to their foreign hosts. The tour included the Americus Visitors Center where they learned about the local jailing of Dr. Martin Luther King and the Civil Rights victories that came out of the Americus Movement; the Habitat for Humanity Global Village and Discovery Center; Café Campesino, a local Fair Trade Coffee enterprise inspired through a Habitat for Humanity Global Village trip to Guatemala; Koinonia Farms, where the idea for Habitat originated; and the Jimmy Carter National Historic Site in Plains, where they met with the President or members of his family. Members of the delegation also were treated to airplane rides at Souther Field, the local airport where Charles Lindbergh made his first solo flight. 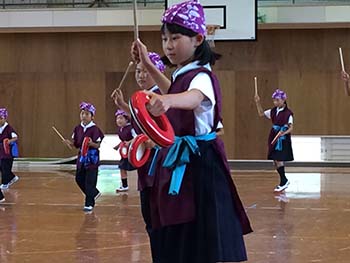 The drama recalls instances in his pre-presidential life where Jimmy Carter took a stand against racial prejudice in his home community. These experiences turned out to form his political persona. Carter was one of a handful of white men who stood on the “wrong” side of the race issue and who, along with Clarence Jordan and Millard Fuller, bore the slings and arrows of the community for their unpopular anti-segregationist positions. After their positions were vindicated by the Civil Rights reforms of the Kennedy and Johnson administrations, all of these men went on to do great things. Fuller founded Habitat for Humanity International. After creating Koinonia Farms, a Christian commune, Jordan wrote Cotton Patch Gospels. Time magazine proclaimed Carter as “The New South Governor” and he rose to the presidency. All of these great achievements can be traced back to individual moments when each chose to do what they believed was right in spite of the costs, and in so doing, created the spirits that guided them through future achievements. Carter’s pivotal moments prior to his presidency are the subject of this play.

More than the story of one man, the play shows the insidious effects of racism. The character in the play who articulates the prejudice of the period ultimately is shackled by his own hatred. The production’s African American spiritual music of the Civil War South speaks eloquently to the issues of freedom and captivity. This performance is the first of three plays that trace Carter’s quest for human rights before, during, and after his presidency.